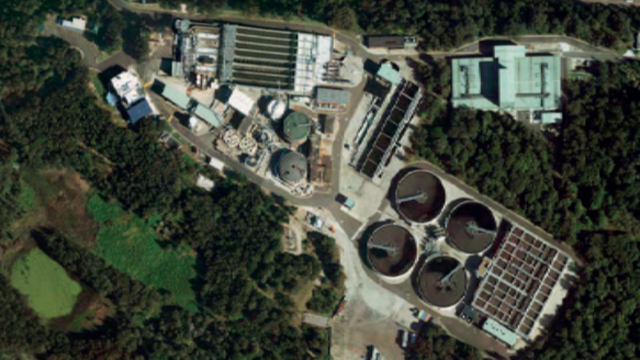 When it was time to replace their old decanters, Sydney Water’s Cronulla treatment plant was looking for the most recent technology that would require minimal change to their existing set-up. Deciding to go with the solution offered by Alfa Laval, they could not believe actual electricity savings of almost 50%.

Sydney Water is Australia's largest water utility. They supply water, wastewater, recycled water and some stormwater services to over 4.6 million people. At their Cronulla sewage treatment plant on the Kurnell Peninsula, about 18 km south of the Sydney CBD, approximately 54 million litres of wastewater are processed a day, comprising around 10% of the 190,000 tonnes of bio-solids produced by Sydney Water every year.

Decanters are the key to the final preparation of the bio-solids in readiness for their transportation and use by other industries. Mark Ziogas, Production Officer, was heavily involved in the technical specification of the tender for the plant’s new decanters on behalf of Sydney Water, then oversaw the installation and commissioning of two of Alfa Laval’s G3 decanters. Rather than focus on moisture rates, the tender concentrated more on the volumetric and hydraulic capacity of the machines to ensure that the decanters could deal with current loads, and have sufficient capacity for any future population increases within the area. Alfa Laval was awarded the tender for a number of reasons. Some added and unanticipated bonuses have appeared along the way.

Sydney Water uses almost 1% of the state of New South Wales’ electricity. It is always looking for ways to reduce its energy consumption  wherever possible. The energy savings promised by Alfa Laval were a key factor in winning the tender, and in fact have surpassed all expectations.  As Mark says:

’The power reduction of what was presented to us, well, we saw an even greater power reduction in reality. Alfa Laval said that they could achieve between 30-40%. In reality, we’re seeing savings in excess of 47% power savings on the decanters alone. It’s very impressive. There were some sceptics. Once the real numbers were relayed to them, they were like ’wow’.

’The previous decanters were rated to 55 m3/hr, but the most throughput we could utilise without compromising capture rate was only 21 m3/hr. Therefore, 21 hours of dewatering was required each day, equating to a total power cost of $73,139 per annum.

’With the Alfa Laval G3-95’s we can comfortably operate at 40 m3/hr without compromising capture. Therefore, running time has now be halved to 10.5 hours a day. The combined efficiency of the machine and the fewer running hours means electricity costs us less than $20,000 a year.’

Power savings of this magnitude represent CO2 reductions of 173 tonnes per year – equivalent to the emissions of almost 40 cars - and total power cost savings of 73.4% or $53,639 in total per annum. On these factors alone & maintenance costs saved, payback should be achieved within 4 years.

By stipulating that the decanters have sealed internal bearings, Mark estimates that the plant saves $50,000 annually in maintenance costs. The machine has now completed 8,000 hours of service, and the internal bearings have not been touched once.

’It has freed us up operationally. Our old machines had to be greased weekly. What was a relatively simple task required a lot of interaction between operations and maintenance. We’re now able to focus on more important maintenance and operations activities.’

Any percentage increase in solids is a good increase. For every 1% gained, Sydney Water saves approximately $55,000 in costs associated with the transport of biosolids from Cronulla WWTP alone. Because the Cronulla plant is performing well, no large reductions were expected, but were most welcome. As Mark explains: ’With our old machines, we were lucky to get 18% cake solids. With the Alfa Laval machine, as soon as it went in, we pretty much hit 20% without doing any optimisation, to the point now where we can get it very close to 22%, just by optimising the process and feed rates. Now, that’s with- out centrifuge optimisation – we haven’t even gone there yet. I’m hoping to see 23% maybe 24% with centrifuge optimisation in the coming months.’

A key benefit was the decanters’ footprint, and the ease with which the decanters can be inspected. The simplicity of the hinged covers means that the machines’ internal mechanisms are easy to access and every component can be easily viewed.

’So, it was simple, it fitted into our footprint, and the orientation of the machine fitted. The feed and the cake discharge zones were basically the same as the previous decanters, so we didn’t have to rearrange the pipework too much.’ This made commissioning relatively straightforward and it occurred within a short time frame. It also provided a safer and a more spacious working area as the Alfa Laval decanters occupy a  much smaller footprint than the old machines, but are equal in production capacity.

Not only were the decanters price competitive, but with the volume they can handle, Sydney Water was able to replace three of its old decanters with two new ones, immediately reducing overall capital and ongoing maintenance costs.

’The big bonus with Alfa Laval is that they gave us a tour of the Huntingwood site and their workshop facilities.  I was totally and utterly impressed. They can overhaul a machine. They have all of the capabilities, including the balancing machine. And having a look at the way they have all of their spare parts, in stock, on the shelves, numbered. It was very reassuring. And just to know that they are down the road, that they are local. So if you’ve got an urgent call out, they’ve always got staff available to come quickly. And we know that when the centrifuge goes away for an overhaul, it’s going to come back in top nick and in a good time frame.’

A distinct feature of the relationship between Alfa Laval and Sydney Water has been the on-going support and communication, which has developed into a genuine partnership. During commissioning, an issue was identified with the wash programme. As Mark explains, ’By working with Alfa Laval, and having that support, we were able to rectify the issue. We were able to talk to someone locally who was able to call upon the experience of Alfa Laval worldwide to resolve the matter.’

Alfa Laval said that they could achieve between 30-40%. In reality, we’re seeing savings in excess of 47% power savings on the decanters alone. It’s very impressive.

’With our old machines, we were lucky to get 18% cake solids. With the Alfa Laval machine, as soon as it went in, we pretty much hit 20% without doing any optimisation, to the point now where we can get it very close to 22%, just by optimising the process and feed rates.

I’m glad we wrote the tender the way we did. We saw some nice machines during the process. I feel proud that we selected a machine that’s exceeding our expectations, and that we have local support. Alfa Laval have gone out of their way to keep us satisfied.  I personally  feel a sense of achievement in that dewatering facility. I’m a satisfied customer through and through. 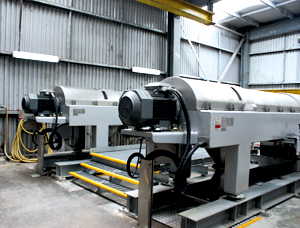 The ground-breaking ALDEC G3 decanter is the result of a rethink of the basic parameters of decanter centrifuge design and performance. 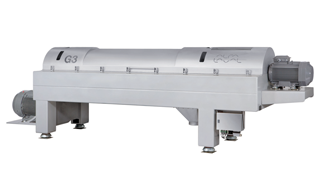 Alfa Laval helps reduce the environmental footprint from water and waste streams, by maximizing reuse of water, by turning waste to value, and by minimizing energy consumption and waste. We offer a complete spectrum of equipment for wastewater treatment, filtration and sludge treatment that helps produce clean effluent for discharge or water reuse, recover heat and reduce the amount of sludge for disposal.