Demands accelerate – so do solutions

Slop oil recovery at Newalta’s Elk Point facility Newalta Corporation is a company that sets the standard in industrial waste management in Canada. This involves dealing with the processing of industrial and oilfield waste, and Newalta runs the largest slop oil processing operation in western Canada, with a 55% share of this specialist market. 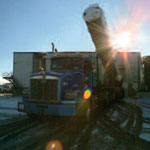 As the intensity of refining operations increased over time, the emulsions that customers sent to Newalta for treatment became more complex and difficult. To deal with this, Newalta and Alfa Laval worked together to determine the best machine/process mix for efficient separation in this difficult application. Comprehensive pilot testing and operations confirmed that decanters were able to handle very high solids loads, which is important in slop oil treatment.

As a result, Newalta and Alfa Laval agreed on the installation of two and three-phase decanters at Newalta’s sites at Brooks, Stauffer, Grande Prairie and Fort St. John. Alfa Laval decanter / disc stack combinations were tested at the Hughenden site.

However, improved production methods in the oilfield industry meant that Newalta found that an increasing percentage of the emulsions in the slop oil it was treating could no longer be broken down with two or three-phase decanters.

A new stage of development

In 2000, Newalta took an ambitious decision to expand its operations dramatically. These plans included treating and selling more oil, as well as maximizing its value by ensuring more consistent quality. Based on past experience, Newalta had found decanters to be the preferred technology. In order to break down the toughest slop oil emulsions and meet the industry standard of 0.5% BS&W, the decanters now had to be combined with disc stacks. What Newalta needed was a machine that could handle high solid loads, extremely challenging emulsions and high throughputs at the same time, and it was therefore only natural for Newalta to again turn to Alfa Laval for advice.

After stringent comparative testing, the answer turned out to be the FOX 15 module, which Alfa Laval had recently developed specifically to meet the needs of the slop oil market. The FOX 15 is a high-speed disc stack nozzle centrifuge that combines a high capacity for handling solids with the superb separation performance of the disc stack.

Trials with the new Alfa Laval FOX 15 module took place at Newalta’s Elk Point facility, aimed at proving that the FOX 15 could reach the target level of 0.5% BS&W at a reasonable flow rate.

The slop oil at Elk Point contains large quantities of abrasive sand, partly in the form of very fine particles that cannot be removed using a decanter. It was therefore crucial that the centrifuge could withstand the effects of these highly abrasive solids.

The tests showed that the FOX 15 unit provided both a substantial increase in flow rate (8–12 m3/hr / 35–53 GPM) and exceptionally good separation, which met the industry standard in full. However, the tests also showed that the fine abrasive particles caused severe erosion inside the bowl of the test centrifuge, especially in the feed distribution zone.

Working together, Newalta and Alfa Laval technicians therefore made a number of important alterations to the design, which resulted in a significant improvement in the ability of the FOX 15 to withstand erosion.

The FOX 15 unit now installed at the Newalta plant at Elk Point supplements the existing decanter installation, so that the process consists of four major components:

Newalta is continuing to refine its FOX 15 centrifuge installation at Elk Point, and has already purchased a similar unit at the company’s mobile processing on-site division.

All Oil and Gas Canada Industrial water and waste treatment